An envelope was received by the Palmerston North Police containing a photograph cut from the Sunday Star Times newspaper, dated 3rd September 2000.

The cutting was a photo of the Lundy family and had HN6315 printed at the top of the photo, as pictured at left.

The image here is from a photocopy of the cutting in the Police exhibit bag, which produces the white reflections of the plastic bag itself.

The lettering is unusual and appears to be stencilled or stamped on the cutting, rather than typed or printed.
As yet, no positive identification of the meaning of the letters has been confirmed.
It looks like a car registration number, and this possibility was considered by Police. 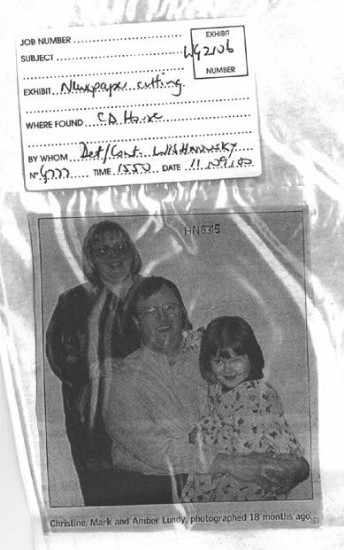 The address on the envelope has the same lettering as below. Note the uneven appearance and shape of the letters.

The stamp is also quite distinctive, being the NZ Post Bach / Crib design issued in April 2000 as part of the Kiwiana series. This series was replaced in June 2000 by the Classic Car series.
The envelope was franked at 5pm on 6th September 2000.

If you have any information regarding any aspect of this newspaper cutting, the envelope, stamp or lettering, no matter how trivial, then PLEASE CONTACT US NOW